...because we all had to PLAY BY EAR.

After receiving this game in the mail, I started making a LISZT of people that could HANDEL this game, and was CHOPIN it down to 2-3. It was tough dragging them out of their HAYDN grounds. (Ironically, I could C that it was filled with the music illiterate... but I was D-termined not to make it E-zy for them.)

When we first began, we started to question if we made a SOUND judgement. Teaching music theory while explaining the rules was a whole lot of TREBLE, and the frequent tea breaks for TCHAIKOVSKY caused a lot of FRETTING.

Soon, my friends got into the GROOVE of the game, moving the tokens around effortlessly, SHARPENING their skills and FLATTENING the competition. I was frequently CHORD BLOCKED and quickly put UNDER A REST. After a few rounds, I was completely crushed that my knowledge of music theory was unable to BACH me up. I was told that all my BASS are belong to them. I had utterly lost all my CLAUDE with this group of friends.

My friends agreed that this game was tough but enjoyable, and gets easier with multiple plays. They subsequently decided to end this game, and wondered if it was suited for MINORS. After all, there was just too much SAX AND VIOLINS. (Though seriously, this game is great for anyone, and is a fantastic teaching or revision tool!)

So much fun! Very excited to use this game as a teaching tool with my students :)

I'm really impressed with the idea for this game. It's brilliant. And the gameplay is great, very fun. I think you do pick up some music theory from playing and with a couple modifications (like hiding the chords or notes in a key signature) you could really force yourself to learn it better.

I received the game as part of Kickstarter pledge rewards, and I must say, the game is just awesome. Not just the gameplay which is very interesting, but there is a lot of music theory applied to it, as well as the historical figures who are in the field of music. By playing this game, musicians will be able to refresh and learned about music theory, and the famous people in the music field, without looking into boring texts and articles. People who have no music background be able to play this game, as the concept is quite clear and easy to understand. The game rules has moderations for newbies, which is able to get the players to be more experienced as they played the game more and be able to Handel the fight to be Lord of the Chords. Players may free to google some of the music theory or famous musical people to learn more.

Musicians and non-musicians (which includes classical music listeners and history geek) can learn about the famous people in music, both through the puns on the cards, and the photos well-photoshoped to create the face of the cards.

I love how the assets of the games are designed - the cards, the retail box, the tokens, but highlights go to the piano box, as it is very well designed. The box serves two purposes, which is able to carry all the contents of the game and also to act as a portable version of a model piano keys consisting of 2 octaves. The accidental coins are also great, as they feel like casino chips. Love the feel of the cards, very smooth and slick.

Overall, it is a well-made card game to teach people, both musicians or not, about music. A must-have for people who are musicians (singers or instruments players), card game enthusiasts, and those who listens to music. 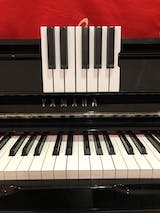 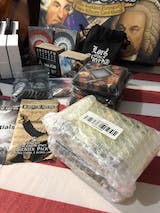 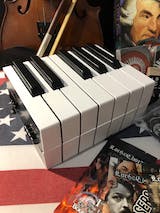 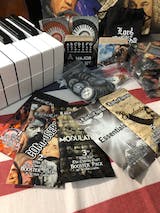 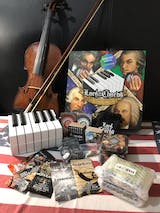 This game is awesome!! We were nervous about rookies playing this but it is super easy, educational, and many opportunities for depth making it high in replay-ability and music education. My wife has big plans for this in her music studio she runs.

It’s perfect for those that know very little about music theory. It’s good for the gamer because it has so much replay-ability to never get old. Everything about the game is cool, there is a lot of humor in the game and the puns are off the staff. Thanks guys.